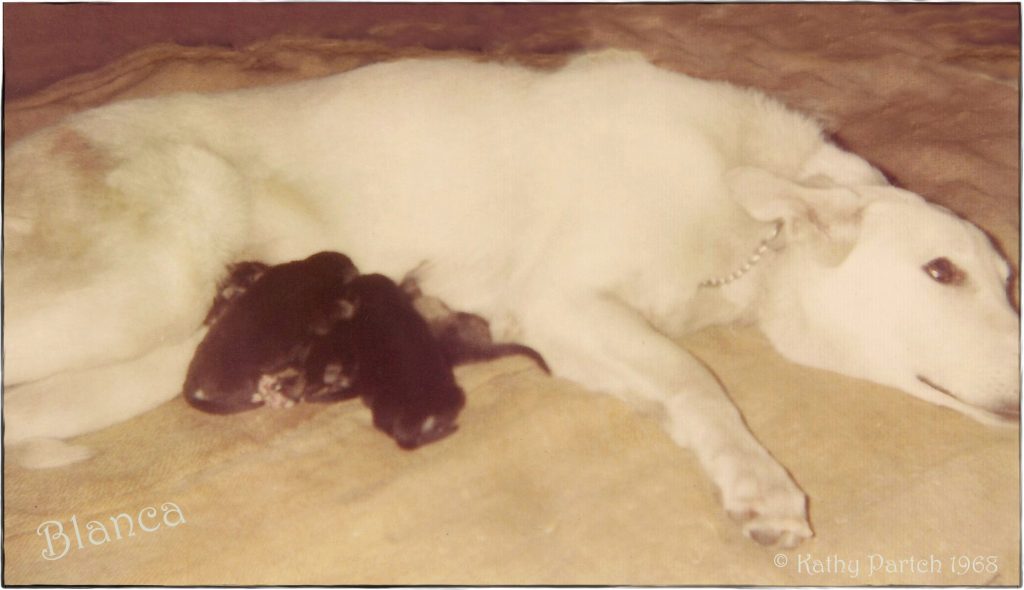 Our animals are extremely intelligent. Sometimes more than we give them credit for. Our purebred black and tan Skipper was our first GSD shortly after Joe and I married in 1967. Not long after, we had gotten a purebred stunning snow white GS named Blanca. She was only one year of age. Her previous owner was a veterinarian student that couldn’t keep her anymore; do to his detailed enduring education. The young man that sold Blanca to us; had gone over all of the obedience commands he taught Blanca with us. That was exciting. Blanca came with more training than we had. When the young vet left, Joe and I looked at each other asking, “Now, do you remember everything he told and showed us?” End of that story.

My new ten-month old Skipper was my dog. Blanca was going to be Joe’s. After having our new girl for some time, she gave me a moment one day I’ll never forget. I was riding my horse with my next door neighbor, Ruth not knowing that her five-year-old daughter, Lisa had later walked across the wooded field between our houses looking for her mom (her dad evidently wasn’t watching). As Ruth and I were coming back on our horses at the end of my driveway, we saw Lisa and Blanca walking side-by-side down that driveway towards us with her hand over Blanca’s back. Blanca never being around little children and was a very protective dog of her place, surprised both of us. Ruth freaked out. I could see Blanca was totally relaxed with this instant partnership. Lisa to this day is completely an animal person. So our dogs can read us very well. I had told Ruth to not dismount, or act upset. Blanca could pick up on that. It was a beautiful moment for sure. And it told me something about Blanca I never knew until that day.

Our new girl, Blanca became an exceptional part of our life. She pretty much became a monarch. She never seized to amaze us with her intelligence and loyalty. As a novice couple at that time, Blanca and Skipper did have a number of litters together. Blanca always displayed her greatness in motherhood. Their offspring only came in very rich black and tan, bi-colors and silvers. So with the colored litters confirmed Skipper didn’t carry for the white gene to produce any whites with Blanca. And Blanca’s real masking gene was silver.

Difficult to write: Blanca later went for her spay. She never came out of the anesthesia losing her equilibrium. My vet said, “She’ll come out of it. Give her some more time.” On the third day, while caring for my horses she still had not gotten any better. While with me, she fell and died instantly at my feet. With the devastation of losing such a beautiful soul we had her autopsy done. It was said; she had pneumonia and wasn’t of the best health to have been spayed. Back in the late 1960’s I don’t remember having my vet do any preanesthetic blood work before undergoing an operation until some years later when changing veterinarian’s.

We’ll never forget this incredible soul Blanca that touched our lives with such greatness!

The Masking Gene — Some people think that if you breed a White German Shepherd with a standard one, the white gene will cause the offspring to be born of lighter color. This is not the case, however. The white gene is not a dilute gene, like liver and blue; it is a masking gene (meaning the recessive gene masks the dog’s true color).