The Heart and Soul of Bart

In Loving Memory of 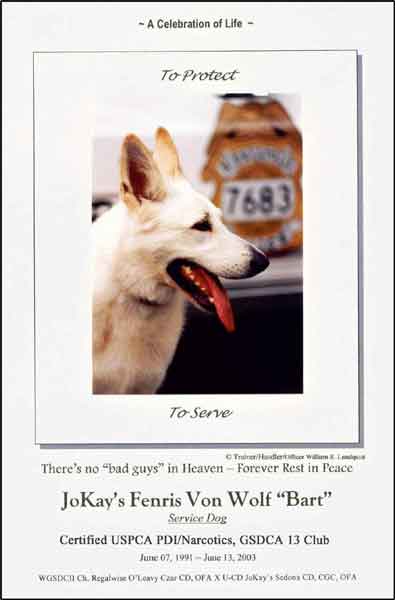 Unique this German Shepherd dog was born,
For here he lay so little and forlorn.
One of seven and mighty at heart,
Yet, this poor little guy had a very rough start.

As days went by he nursed his way to vigor,
Later on named Bart officer Bill’s loaded trigger.
What little did I know where this puppy would end,
Not only in the hands of Bill also a friend.

What splendor this white guy displayed,
With loving black eyes and grand spirit betrayed.
Not large in size but agile as a gazelle,
For sure at that moment was Bill’s best pal.

Many stories and lives this shepherd did share,
Touched many a heart none that could compare.
Blazing fire and bad guys they caught,
Yearly trials and life in general they sought.

Many years have passed officer, Bill and shepherd gone by,
Left many a memory and tears we did cry.
But yet in all their glory there’s so many to thank,
All of this reflected in their dedication and rank.

Clear up on a special hill surrounded by flowers,
Lay Bart and all of the police dogs buried in honor.
Many graves touched by the early mornings’ sun,
Now rest their weary souls, only in dreams they do run. 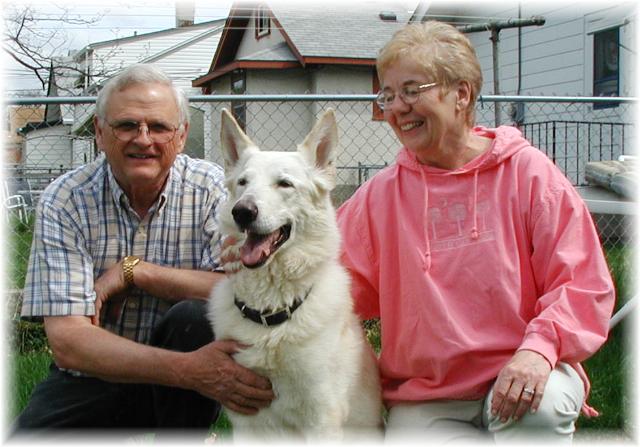 Bill, Bart and wife Pat after their retirement from the K-9 unit
Bart at age twelve 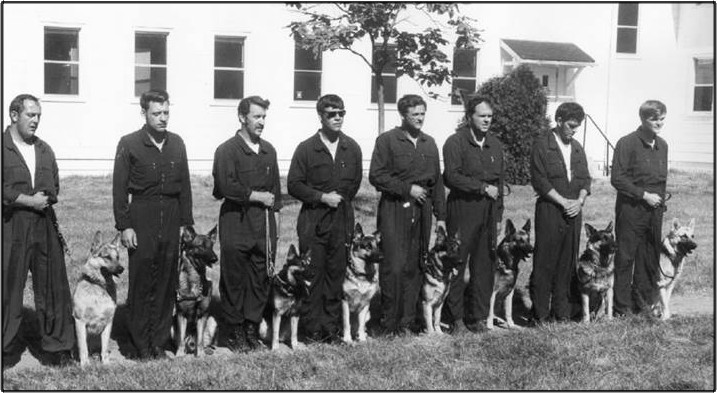 Left to Right
Mark Jacobson, Phil Bishman, Dick Morrill, Charlie Adams, Bill Lundquist, Roger Fancher, Jack Giebel, & Dick Stahura / Dave Neibur entered the class later replacing Jack Giebel.
A retiree had asked me the name of Phil Bishman’s dog in a long ago street photo of him.
Phil’s dogs was named Knight.
(I can see em all now in my mind tied in the shade at their stations at the hangar door.) That was 43 years ago!
We later trained St. Paul dogs at our canine training facility in NE Minneapolis on the Mississippi River. Both Departments were members the USPCA, United States Police Canine Association, Region 12,
Later St. Paul branched off to form their own region 18 and build their own training facility. — William Lundquist

Trained by Mike Fisher and Welton Kopp who actually were the first-They started the program after they themselves had undergone training in Washington, D.C.