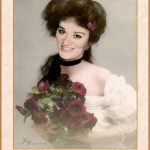 Some time ago, daughter JoAnn asked for any kind of artwork I could create for her as a keepsake. Sure I’ll do that. I truly felt that just any subject wasn’t good enough. So I asked JoAnn, “What would you like the most?” She said: “anything of a Gibson Girl. I have a collection of them.” So, while I read all about Gibson Girls’ in the turn of the century’s “ideal” woman. I said; that’s our daughter JoAnn. This is the portrait I did of her as a Gibson Girl. She had no idea what I was going to do. It was sent UPS to MN ready to hang! JoAnn called immediately thanking us saying she screamed when she opened it. Thank goodness, it was an optimistic scream!