You are what happened when I wished upon a star…

One morning I walked into one of the greenest pastures ever. Below a hill to that pasture stood a beautiful golden horse that looked back at me. The sun enhanced her breathtaking, golden coat as her luminous long white mane and tail complimented this truly exquisite creature. I walked slowly to where she stood; I then reached out and offered her a large marshmallow. She took it gently from my hand. We looked into each others eyes. I then took a deep breath and stepped into our future. The rest is history.

Mother Muriel, sent me some old photos of my first quarter horse mare, Goldie, and me taken when I was fifteen. Those were some of the best days of my life. I had longed to have a horse for so many years, and it was finally going to happen. Goldie was only one and a half years old when I got her. She was extremely spirited and spoiled. She was the only horse on a dairy farm in Lewis, Wisconsin. She ran with a herd of Holstein cows that she ruled over daily. I began training her myself. I barely knew a thing about training horses. I didn’t have a saddle at the time, so I learned the hard way, but the best way, bareback. I’m really lucky to be alive because I fell off so many times it wasn’t funny. But, I sure learned how to ride after that. Goldie and I then started our amazing adventures together.

Among many good memories are these. I borrowed a beautiful black saddle all trimmed in silver for the 1964 Cottage Grove, Minnesota Fourth of July parade from a dear friend, Paul Bowen. The saddle was a stunning piece of work. Paul raised and showed Palomino American Saddlebreds. He was always so kind to me. The bridle that matched Paul’s black saddle was mine. I sent for it out of the Sears catalog. I think I only paid twenty-five dollars for it back then…big money! Mother made me a blue serape with white fringe and custom made huge sequined butterflies on each side of it. She worked so hard to get it just right. She designed and had sewn show outfits in the past for Paul, and made my outfit for this parade. Oh yes, great memories! Mother was always the one to take those special photos, too. And father had made the arrangements in the very beginning to bring Goldie to Minnesota for me. He helped me a lot with Goldie through those wonderful times. Thank heavens for wonderful mothers, fathers and friends.

Ray Hansen, my father George’s best friend, who owned the farm, gave Goldie to me to use if I promised to train and care for her. I wanted to buy her, but he wouldn’t sell her. Ray and his three children had no interest in horses. It was a strange situation that never changed as the years went on. I brought Goldie home with me to Cottage Grove, Minnesota. I had had her for about five years when Joe and I married in 1967. A year later Joe said we should approach Ray one more time to buy Goldie. We didn’t want to be responsible for someone else’s horse. Ray still wouldn’t sell her.  “We’re taking her back to him,” Joe said. I was heartbroken. At the time, it was the most difficult decision I had ever made.

Soon after we returned Goldie, Joe bought me a beautiful dark bay registered quarter horse stallion to raise and train. We named him JoKay’s Day Star, aka “Kid.” Some days later, he gave me my first German Shepherd Dog; we named him Skipper. The Kid and Skipper were both nine months of age and became best friends. They went everywhere together. The two of them kept me busy and happy, but I still really missed Goldie. Goldie and I had shared an inseparable bond with each other. Those memories continued to haunt my soul.

Four years later I heard Goldie had her first foal. She always had the instincts for motherhood. I remembered that when she was pastured with other horses, she would separate the small Shetland and Welsh ponies and form her own little herd to protect. My goal now was to see her once again. It was a need deep in my heart I had to nourish. So, we made the trip to Lewis, Wisconsin once again. As I walked up to her pasture, I could see her way off in the distance with her new foal. Tears came to my eyes. And my memories with her tore through my heart with a deep ache. As I did when I had her in pasture, I called out her name. She always came to me. She lifted her head quickly as if God had called out her name this time. She stood there with her head held high staring towards the sound of her name. Putting my hands around my mouth, I called for her again; she whinnied and came running. She remembered after all those years. It was bittersweet. I spent time with her that day, and it filled my heart with pleasure to see her so happy and healthy. She was a good mother and loved her foal greatly. After that day, I chose never to see her again.

Precious Goldie, may you now run in sweet clover pastures, as rainbows shed eternal light on you. 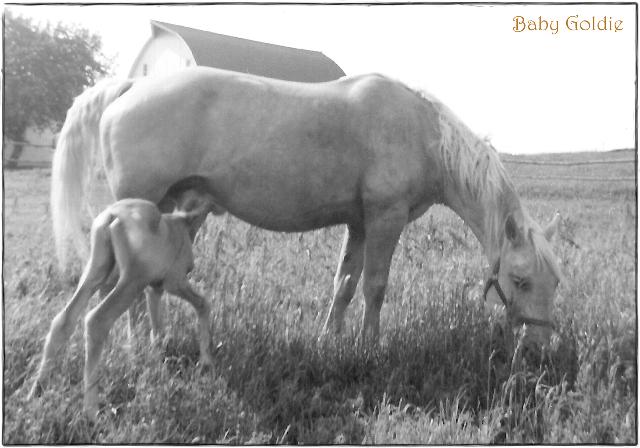 “Gypsy gold does not clink and glitter. It gleams in the sun and neighs in the dark.” 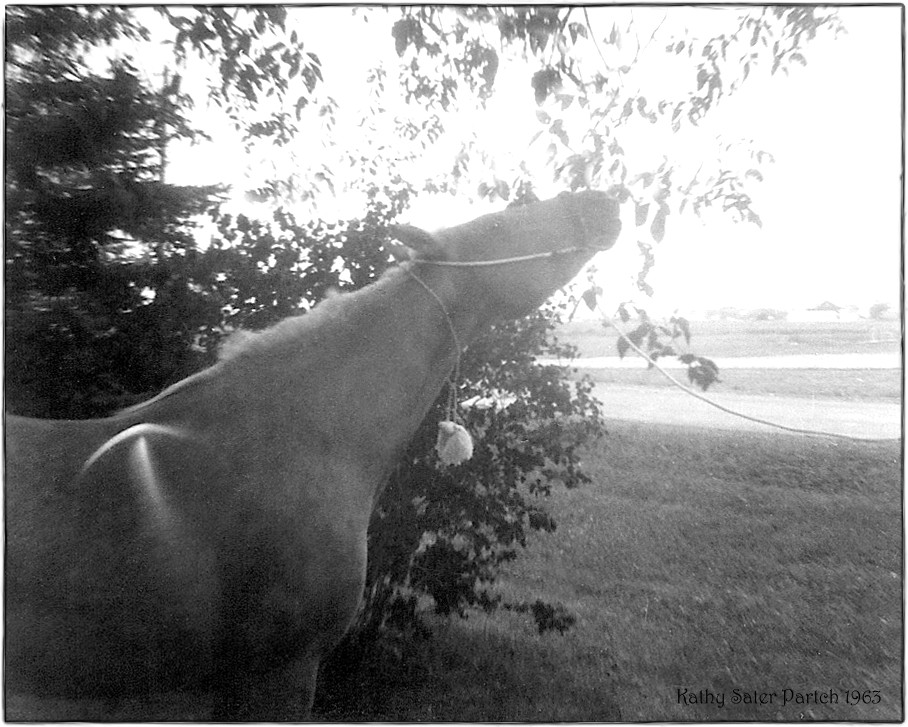 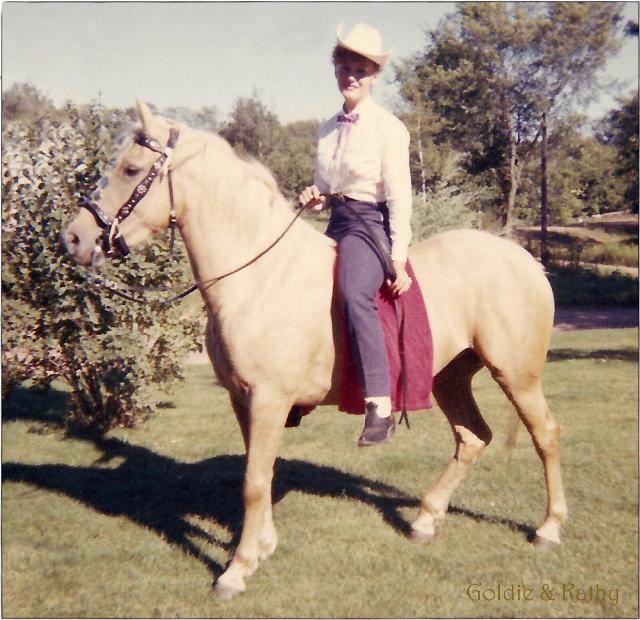 Goldie and Kathy in WI before I brought her to Cottage Grove, MN where I lived at that time. I was fourteen in this photo.
Photo: Muriel Sater 1963 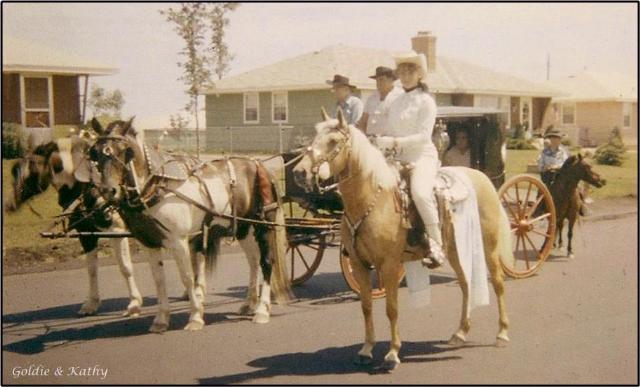 Kathy and Goldie getting to ride in the 1965 Cottage Grove parade
Photo: Muriel Mae Olson Sater 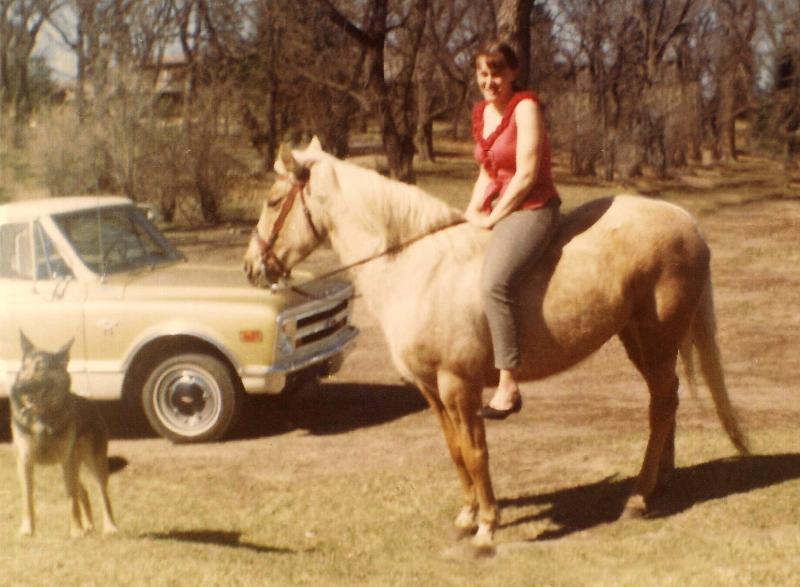 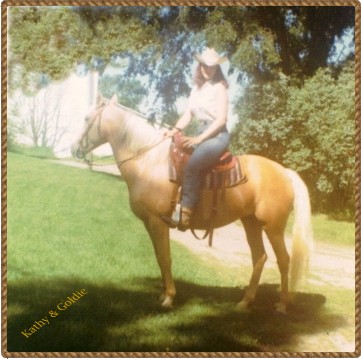 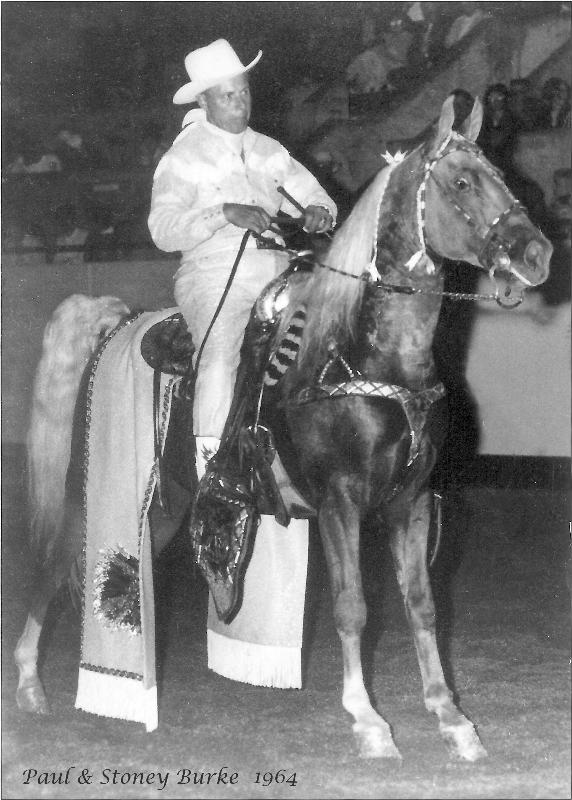 This was Paul Bowen on his champion Saddlebred Stoney Burke. My mother Muriel made Paul’s outfit for this show. It was a light blue sparkly material laced in white fringe. Light blue was always beautiful on a palomino. 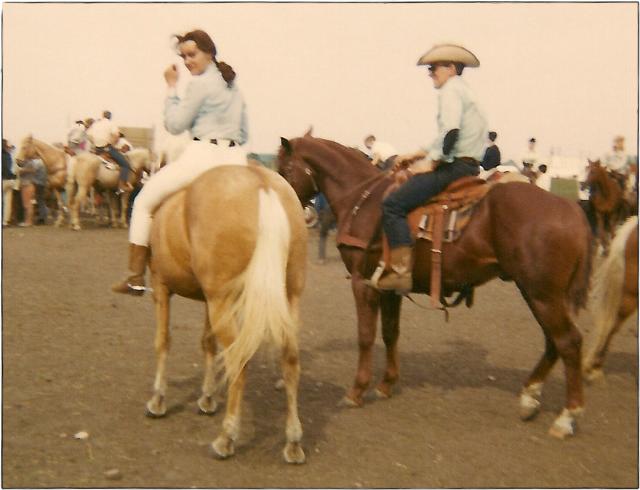 Kathy, Goldie, Joe with his beautiful quarter stallion Precocious Colt. Precocious was an awesome working horse. He would do anything asked of with excellent temperament for a stallion. This day June 1967 we entered both horses at this fun show.
Photo: Muriel Sater 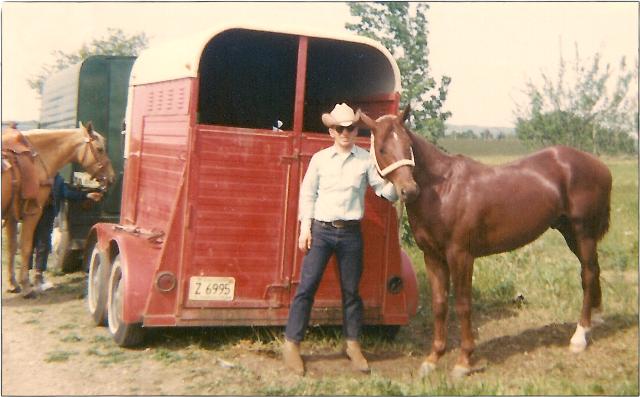 Joe with his wonderful horse Precocious at the show. Goldie off to the left. What a fun day! 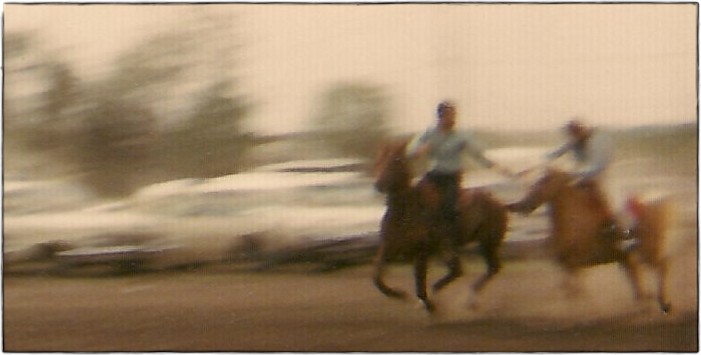 Joe and Kathy doing a crepe paper ribbon race. We both hang onto the ribbon running the fastest time. The only problem, Goldie could never keep up to Preocious. He was extremely one of the swiftest horses ever! To bad Joe had to hold him back. We still had fun.
Photo: Muriel Sater 1967 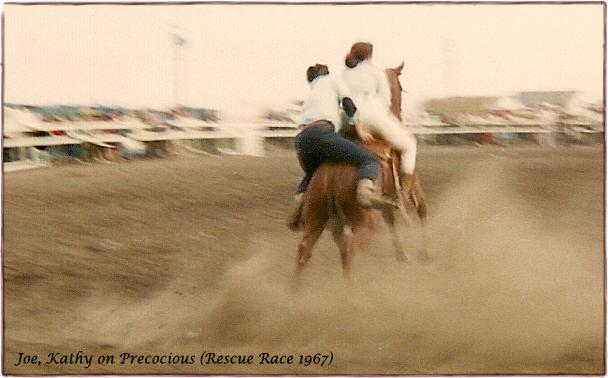 In the ribbons that day! Photo: Muriel Sater 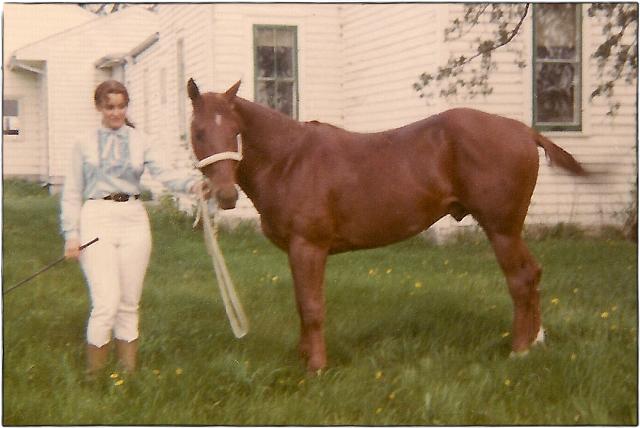 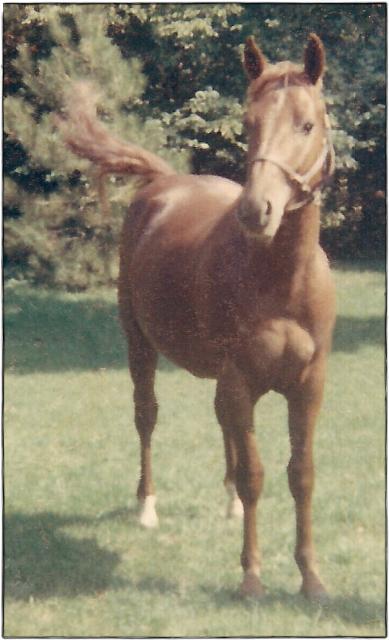 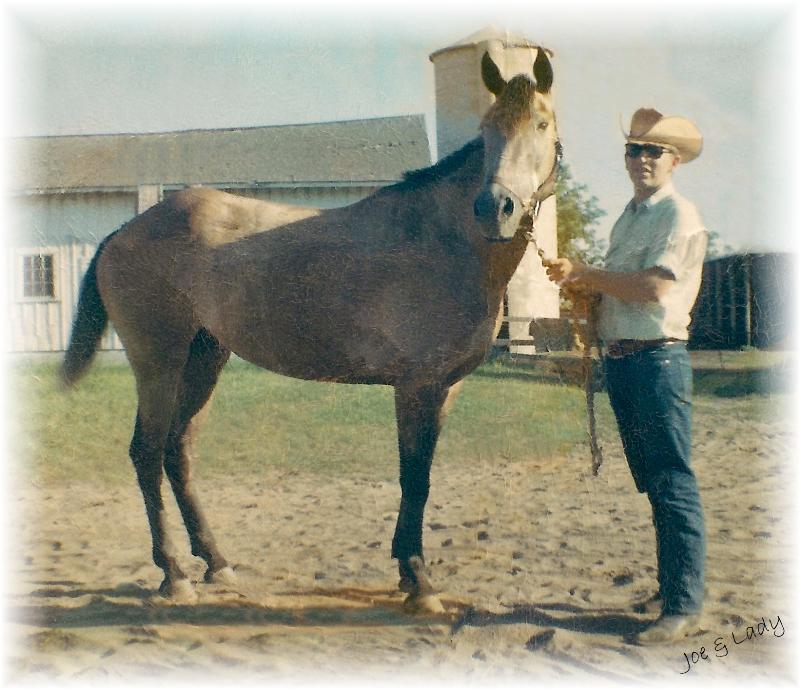 Joe and his favorite mare Lady in 1965 Our yearling stud colt JoKay’s Day Star aka Kid was another awesome horse in our life. I showed halter and Western Pleasure with him. He had an amazing temperament for a stallion 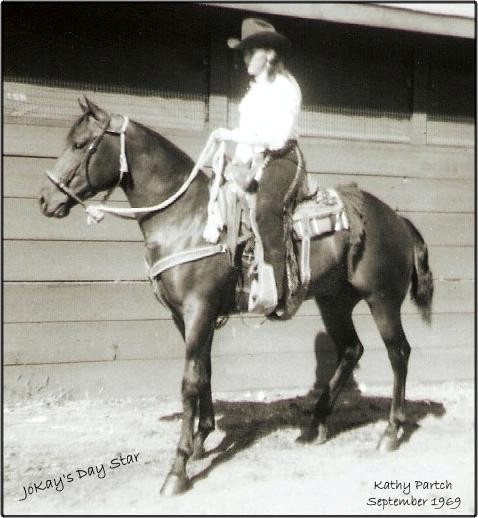 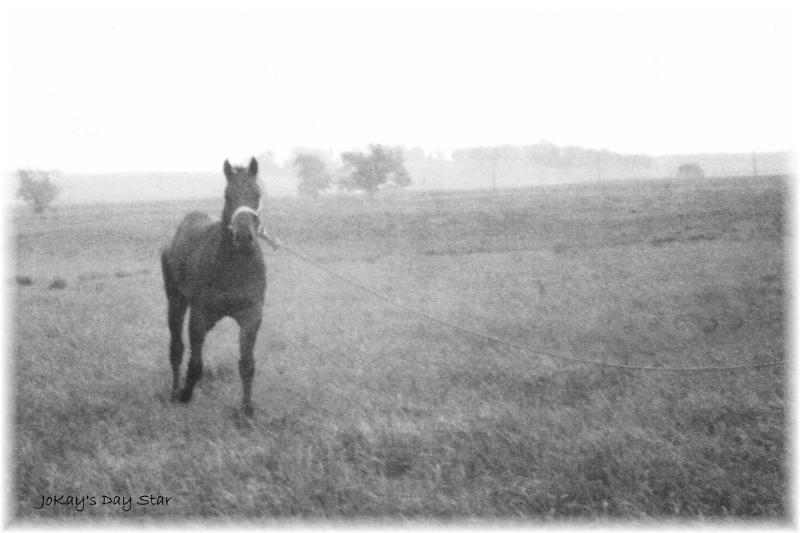 Working the Kid on a lunge line A gorgeous head-piece and what was in it! 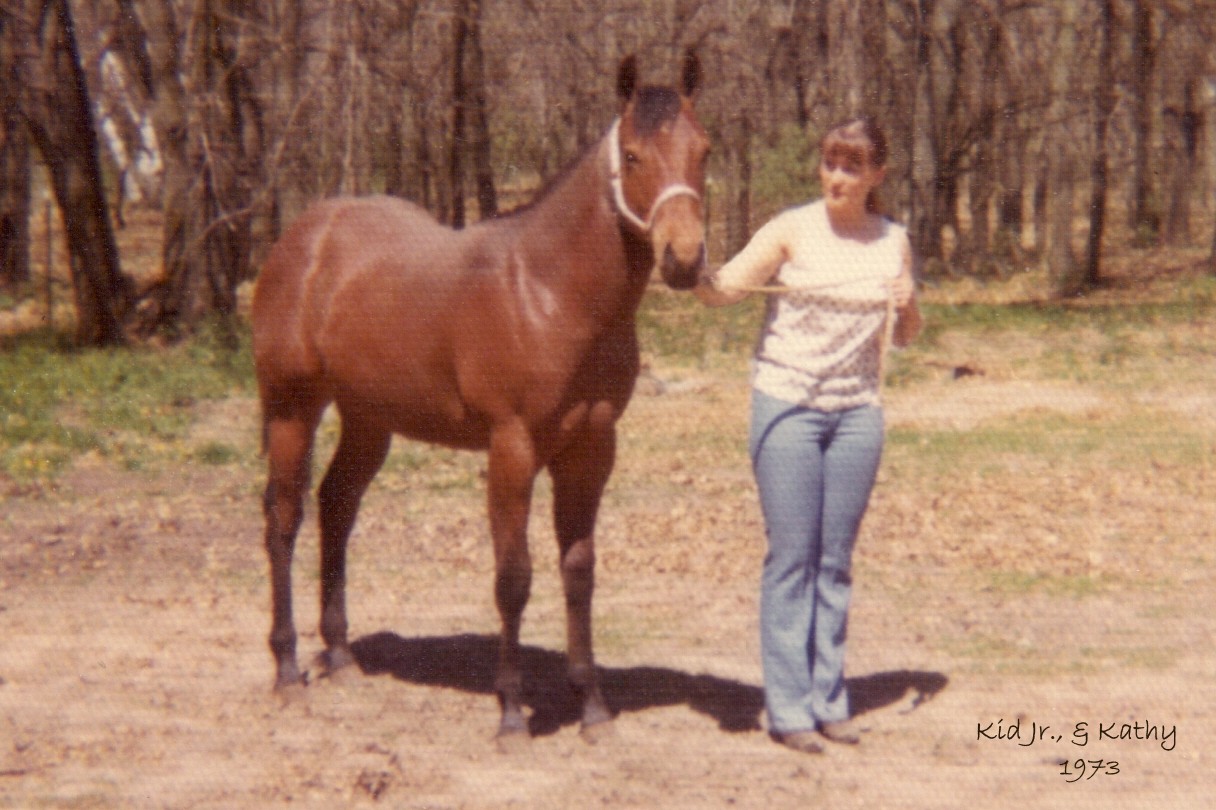 Yearling colt sired by the Kid. Another beautiful temperament 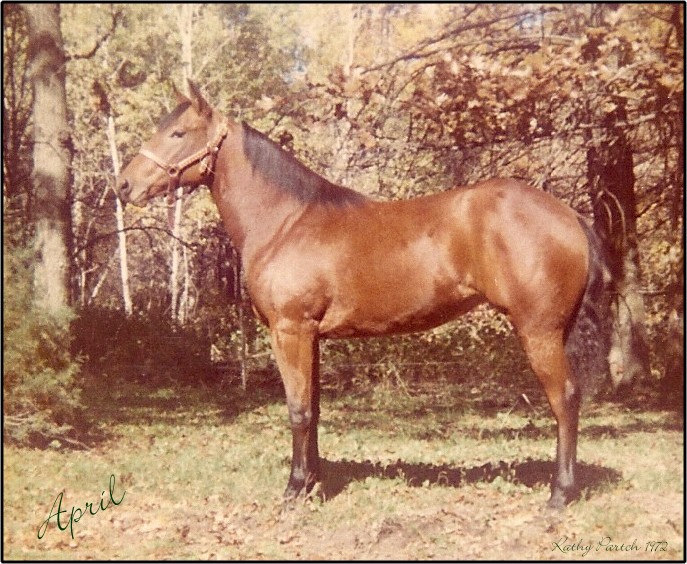 Little Sexy with his dam Poco just after winning their class Chamberlan’s Ranch in Medora North Dakota while on the road full time with our band Mountain Dew Country getting to ride one of their working quarter horses Shaw. He was amazing! 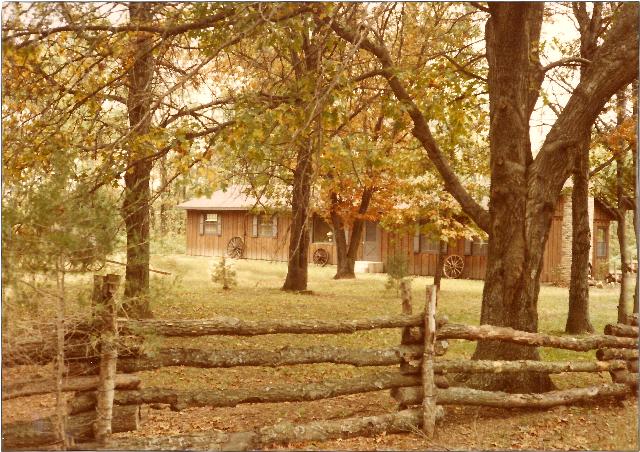 Our hobby ranch in Welch, MN Horses are amazing. They’ve been with us for thousands of years. They’ve been a great part of my life as well. Horses have done everything for man, and still do to this day. But having respect for their power is a necessity. My Grandfather, John Oscar Olson used his draft horses on his Cushing, WI farm for many years until they were finally replaced by the tractor. I want to share a story about Grandfather John’s father, Alex Christian Olson and his team of horses back in his day.
Alex’s death told by Edward Olson: Alex was killed in a run away with his team of horses and a disc at age seventy-five. He had been disking up on the twenty acre as it was called. Uncle Charley (Alex’s one son) told his father not to do anything with the horses but he wouldn’t listen. The one mare in his team had a colt back home and was anxious to get back to it. A trace chain came loose to the disc and Alex was getting off to fix it; the horses pulled ahead and he fell forward, his pants leg was caught on a bolt. So the disc ran over him and one blade cut his calf muscle. The team then dragged Alex from a neighbor, Leonard Peterson’s driveway down one hill and up the other through the yard to the horse barn that had a big large stone step where then Alex’s head was hit. Uncle Roy and Aunt Pearl were there from CA at that time. Alex’s sons Harvey, Charley and Johnny and I were shocking grain at Johnnies place. Roy took Alex to the hospital but it was too much for his age and he perished.
Alex Christian Olson 1859 — 1934 I remember tracks in time on sand,
Stamped firm on the heart of the land;
Bless their memory where they trailed our way,
Looking back! Never lost, in our hearts they stay!